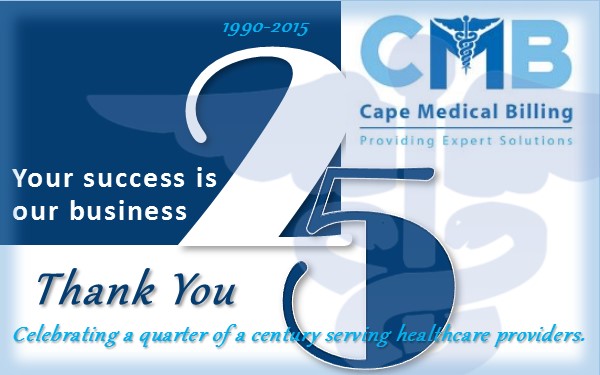 WHILE EASING THE ANGST FOR HEALTHCARE PROVIDERS

While there are many family businesses at the Jersey shore with a tourism focus; selling food, fun, and vacation memories, few are like the Pappermans of Cape Medical Billing in Cape May Court House. The only such business of its kind in Cape May County, Rich and Crystal Papperman have provided medical billing services for physician practices and Emergency Medical Services for a quarter of a century now out of their offices on Locust Lane.

Among the staff of 20 is Papperman’s mother Delema helping with office work. His late father Richard (AKA Dick) is remembered by longtime clients, visiting offices and hand delivering reports until his passing in 2008.

“Mr. Papperman would come in the 15th Street Station and collect the reports back then,” said North Wildwood Fire Chief Jeff Cole, Sr. recalling the mid-90s when the senior Papperman was working five days a week at his son’s medical billing service. “Dad use to help out,” recalled Papperman, “and when he passed, mother took over.”

In those 25 years the company has weathered many a Jersey Shore hurricane and nor’easter along with the turbulent evolution in the healthcare industry. Complicated by insurance regulations and red-tape, physicians are now forced to focus more and more on the business of medicine along with the practice of medicine.

“What has changed most are the numerous administrative demands placed on the private practitioner for things that have nothing to do with what we were trained for: caring for patients,” said long-time client Avalon physician Paul Hierholzer, DO adding that governmental and insurance company oversight has imposed a host of requirements regarding documentation which has stressed practitioners.

“Cape Medical Billing has been helpful through the 17 years we have been associated. Rich (Papperman, CMB President) is always available to discuss an issue, help with burdensome Medicare and commercial insurance paperwork, and assist with denials,” Dr. Hierholzer explained. “He has stood with us to help prevent the corporate insurance machine from rolling over us. That is the best thing they offer--help when it is most needed.”

Throughout those 25 years there have been challenges and changes in the healthcare industry. In Cape Medical Billing’s early years insurance claims were all hard copy which had to be printed out and mailed out, recalled General Manager Crystal Papperman. “It was very labor intensive and significantly delayed payment for our clients,” she lamented.

“In 1990 we had to manually post charges and payment,” added Rich Papperman, “Medicare paper claims paid in 28 days. But today, with electronic submissions we streamlined the process, cut down on paper use, additional processing, and our clients are now getting paid in a fraction of that time.”

While technology has allowed tasks to be accomplished faster, it also is a cause for anxiety when its benefits are threatened noted Office Manager Robin Hutchins who has been with CMB since 1991. “We were all concerned with Y2K, thinking that come January 1, 2000 all the computers would crash. Thank goodness that didn’t happen,” she said. However, the government mandated implementation of enhanced medical coding is causing more anxiety for healthcare providers than Y2K ever did.  The U.S. Department of Health and Human services has been working on the transition to a more complex and detailed coding for years that went into effect throughout hospitals and physician offices on October 1. Much like the countdown to Y2K, providers braced for the implementation of International Classification of Diseases to its latest version. More commonly known as ICD-10, this system of codes used to report diagnosis replaces ICD-9--what now seems like the simple 13,000 codes to 68,000 specific designations for just about any diagnosis one could imagine…right down to the exact location on the body.

“We’ve been holding seminars on this for over a year now and warning healthcare providers to make sure they are well versed and trained for ICD-10” said Papperman. “Let’s hope the preparation paid off.”

Over the past 25 years Emergency Medical Services too have seen their share of challenges related to the delivery of healthcare services.

“Our operation has grown significantly, with the biggest changes being the wide variety of specialized training required as the public expects absolute professionalism and competence--and rightfully so, “said North Wildwood Fire Chief Jeffery Cole, Sr. However, the increasing demand also necessitates additional training—stressing the department which serves a resort community with a substantial swing in population over the summer months. As Chief of a combination career and volunteer fire department, Cole has several areas of responsibility including managing both service and business ends of EMS. Budget, personnel, equipment, scheduling, training; coupled with responding to emergency calls (which have no set hours of operations) - all demand the Chief’s attention.

North Wildwood Fire Department has used Cape Medical Billing since 1995 when the fire department took on EMS. “We have remained with Cape and have never even considered changing,” he said. “Cape Medical Billing has been a most valuable asset in simplifying a process that could otherwise demand more of my time--time I simply do not have.”

Since the company assumed EMS duties each Chief has made changes, but Cape Medical Billing has remained a constant.  “I understand the business of medical billing is becoming tremendously complicated,” said Chief Cole, “however I have not once experienced any differences or difficulties in service.”

“The best thing about working with Cape Medical Billing is that they make my job so much easier,” he added. “They make the collections, I sign a voucher once a month.  They send the reports. It’s that simple.”